Freightliner trucks have been part of ShipMyRide's equipment for a long time!
Some exciting news have come to our attention, take a look: 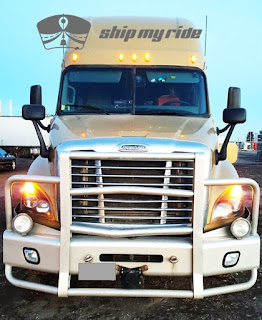 Expected to open early 2020, the new building will sit on 13.5 acres and boast 35 service bays, an indoor showroom, warehousing space, and an enhanced new service and parts department.

“Our new location gives us the chance to more than double our space and build an extremely exciting service concept for Manitoba,” said Ken Talbot, president of Freightliner. “We’re excited to offer our customers and employees more: more space, more parking and a more modern facility overall. We also plan to grow our staff once we move in to the new location.”

Canada West, a privately-owned real estate investment group based in Edmonton, Alta., will also invest at CentrePort, spending $60 million to construct up to eight build-to-suit and build-to-lease buildings on five lots within the park.

“The market has a very limited supply of new, well-designed industrial commercial space especially in the Northwest,” said Dale Klein, president of Canada West. “National tenants are looking for comparable properties to what they have in other markets. In Winnipeg, the build to suit option is really their only option. We believe the location of the Park, and its connectivity to transportation, coupled with our level of fit and finish will be a competitive advantage. Winnipeg is an incredible market to invest in because there is high demand and so much potential for growth. Before even breaking ground, we already have one tenant secured and expect to have several more confirmed soon.”

“We are thrilled that Freightliner, who has been at CentrePort since the beginning, and Edmonton-based Canada West have both found a home for their new facilities at CentrePort,” added Diane Gray, president and CEO of CentrePort. “Both companies have strong visions for their futures. They’re investing in the continued success of their individual businesses, but they will also contribute the overall growth of Manitoba’s economy. That’s ultimately what CentrePort is all about.”

Fuel-efficient driving techniques by the Department of Natural Resources Canada

January 16, 2019
If one of your resolutions is to save money, or be more conscious of your expenses or even help the environment, we have a way you can do all these. The ShipMyRide team did some research on an interesting topic, which is how we can be more fuel-efficient while driving. Fuel-efficient driving can save Canadians hundreds of dollars in fuel yearly, improve road safety and prevent wear and tear on your vehicle. By adopting these 5 fuel-efficient driving techniques, you can lower your vehicle’s fuel consumption daily and carbon dioxide emissions by as much as 25%. 1. Accelerate gently The harder you push your gas pedal, the more fuel you will be using. In the city, you can use less fuel by easing onto the gas pedal gently. For example, to be as fuel-efficient as possible, take 5 seconds to accelerate your vehicle up to 20 kilometres per hour from a stop. TIP: Imagine you have an open cup of coffee on the dashboard. Don’t spill it! 2. Maintain a steady speed When
3 comments
Read more