Daylight Saving Time, ShipMyRide is ready! Are you?

November 04, 2018
Today is the day that we need to change the time on all our watches, clocks and cars. Daylight Saving Time starts today. This is used to save energy and for us to make a the most of natural daylight.
Nowadays, almost 40% of countries worldwide use DST to better use daylight and conserve energy.

- The first countries to use DST were Germany and Austria.

- A little-known fact that a few hundred Canadians beat the German Empire by 8 years. On July 1, 1908, the residents of Port Arthur, Ontario, today's Thunder Bay, turned their clocks forward by 1 hour to start the world's first DST period.

-New Zealand scientist George Vernon Hudson and British builder William Willett, came up with the idea of proposing a 2-hour shift forward in October and a 2-hour shift back in March.

-Many sources also credit Benjamin Franklin with being the first to suggest seasonal time change.

-Daylight Saving Time is now used in over 70 countries worldwide and affects over 1 billion people every year. The beginning and end dates vary from one country to another.

With temperatures changing, time changing, we can unofficially say winter is here. Lot of people need to relocate their vehicle during this season. The weather can be harsh when you are trying to move, or relocate.

Let ShipMyRide help you move your vehicles in Canada. We have found that the most popular routes to move cars during November are from Toronto to Calgary or Toronto to Edmonton.

We can also see an increase of people interested in shipping their cars from or to Vancouver, could it be the harsh winter conditions down the Coquihalla Highway?

If that's your case, shipping your car to Vancouver with a professional company is the smart choice to make. there is no need to risk your safety if you don't feel comfortable driving through this highway.

Whatever the case or reasons are, ShipMyRide can help!
Contact us today to get your free car shipping quote! 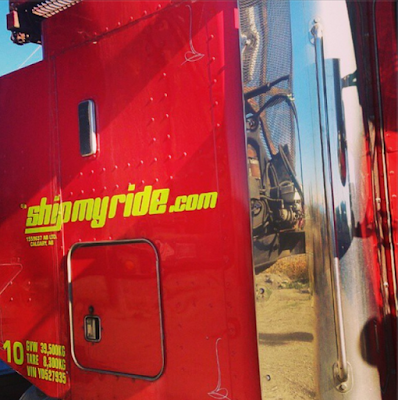 Driving in the city, tips for a safe ride home

November 20, 2018
It doesn't matter what season it is, if you own a vehicle and drive within a city you know how stressful it can be, or how situations can turn dangerous in a blink of an eye. Here are some tips and ideas that will help you be a safe driver and be secure when you are on the road. Be calm when driving. Before you get in your vehicle, make sure you are calm. If you drive when you are stressed, anxious, upset or emotional in any way, you can become a dangerous driver. When you are not calm or relaxed, you wont be as focused on the road as you should; remember driving a vehicle is a huge responsibility as you hold the safety of yourself., your passenger and other drivers on the road in your hands. If you are emotional in any way, give yourself a few minutes before starting your drive. Breathe and try to put your thoughts on hold, so you can concentrate on the road ahead.  Use technology for your advantage when driving. Be aware of traffic waves, or rush hours. the
2 comments
Read more